Arrival Cairo International Airport, meet and assist with formalities and transfer to your Hotel for Overnight stay.

DAY2:
After breakfast, check out , then you will drive to the Giza Plateau, where the only remaining Wonder of the Ancient World is found, the imposing Pyramids of Giza. During your visit to the Pyramids you will have time for unique photo opportunities of the three Pyramids from the Western Plateau. Continue down the valley where the guardian of this mortuary complex, the Mighty Sphinx, bears witness to the passage of time and man in eons of silence.

Your next stop will be at the Egyptian Museum of Antiquities where over 120,000 objects in its 107 halls – including the treasures of Tutankhamen (King Tut) – are exhibited. Then Transfer back to your hotel.

After Breakfast, check out then Board your Vehicle for the approximate 2.5-hour drive to Alexandria. Alexandria Founded by Alexander the Great in 332 B.C., Alexandria is the shining pearl of the Mediterranean. Immortalizing Alexander’s name, the city flourished beyond all expectations into a prominent cultural, intellectual and economic metropolis. It was the renowned capital of the Ptolemies and the setting of the thrilling drama involving Cleopatra, Julius Caesar, Mark Anthony and Octavius.
Begin with a drive through the colorful streets of Alexandria. View the unique architecture and experience the charming nostalgia of yesteryear. Visit the Catacombs of Kom el Shoqfa, an extensive three level funerary complex dating from the second century A.D.
Then proceed to the National Museum housing underwater photographs and statues from the ongoing operation to salvage artifacts from the sunken palace of Cleopatra.

A scenic drive along the beachfront boulevard will take you to the Montaza Gardens where the summer palace of King Farouk is located. Stroll through the palm covered grounds and view the palace, still used today for official state functions.

Next, proceed to the Bibliotheca Alexandria, one of the most unusual architectural masterpieces of the 21st century. Marvel at the ultra modern interiors as a library guide takes you through Alexandria’s crown jewel.  Then start your return back journey to your hotel at Cairo.

Then Transfer to the train station at Cairo for your overnight Sleeper train to Luxor. Dinner on the train.

Arrival in Luxor and embarkation
Arrival, meet & assist by our representative & Check in at Nile Cruise. Excursion tour to visit Karnak Temple, which is a serious of temples, built in different reigns. Starting by the Avenue of Sphinxes visit the Unfinished Propylon, the Hypostyle Hall with it’s 134 gigantic columns, the Obelisks of Queen Hatshepsute and Tutomosis III, the temple of Amon adorned with lotus and papyrus designs, the Granite Scarbeus of Amenophis III and the Sacred Lake. Transfer to Nile Cruise. Afternoon tea. Dinner on board & Belly Dance show. Dinner & Overnight in Luxor.

Day5: Luxor / Esna
Breakfast. Visit the West Bank including: Valley of the Kings (Is a valley in Egypt where for a period of nearly 500 years from the 16th to 11th century BC, tombs were constructed for the kings and powerful nobles of the New Kingdom (the Eighteenth through Twentieth Dynasties of Ancient Egypt). The valley stands on the west bank of the Nile, across from Thebes (modern Luxor), within the heart of the Theban Necropolis.), Colossi of Memnon (The two colossi are made of sandstone, which during ancient times was brought from Gabal El Silselah. Each colossus, including the pedestal and the crown, is about 21m tall and represents King Amenhotep III seating on his throne, wearing the Memes, or royal headdress, with the divine cobra protecting his forehead. On the sides of the colossi there is a representation of the Nile god Hapi, bending together the lotus and the papyrus plants, symbolizing the union of Upper and Lower Egypt) and Temple of Queen Hatshepsute (Hatshepsut was the fifth Pharaoh of the18th-dynasty who was one of the handful of female rulers in Ancient Egypt. Her reign was the longest of all the female pharaohs. Her funerary temple still stands as a tribute to her incredible rise to power). Lunch on board. Sail to Esna. Afternoon Tea. Disco Party.Dinner & Overnight in Edfu.
Day6: Edfu / Kom Ombo
Breakfast. Visit the Edfu Temple (Lies in Edfu town, 123 km north of Aswan on the west bank of the Nile. It dates to the Ptolemaic period. It was dedicated to the worship of god Hours represented as a falcon. It is one of the most beautiful Egyptian temples, distinguished by its huge splendid structure that blends Pharaonic and Greek architecture. Its grandeur competes with Luxor temples. It is the second largest temple after Karnak. It also houses the Nilometer and a huge pylon at the entrance). Sail to Kom Ombo. Lunch on board. Visit the Kom-Ombo Temple (Located in Kom Ombo town, 45 km north of Aswan. It is built on a hillside overlooking the Nile. This temple was constructed in the Ptolemaic Roman era for the worship of god Haroeris and Sobek, the crocodile god. It is noted for relief engravings on its walls which show ancient surgical tools, bone saws and dentistry tools. Nearby there are three mummified crocodiles. They are now in Hathor’s chapel). Sail to Aswan. Afternoon Tea. Dinner on board & Galabya party. Dinner & Overnight on board.

Day7: Aswan
Breakfast. Excursion tour to visit, Philae Temple (The Temple of Isis is one of the greatest Temples in Egypt and it occupies about a quarter of the island. It is the main Temple on the island, with its huge, complete, pylons and beautiful scenes), High Dam (One of the most outstanding architectural achievements of the twentieth century. It was constructed to replace the old Aswan dam built in 1902. The High dam was constructed to protect Egypt from the floods as well as providing irrigation and electricity all over Egypt. It is 3600 meters long. Visitors can easily locate lake Nasser which is a huge water reservoir) and Unfinished Obelisque (The beautiful red granites that were used in building the temples and monuments in the ancient days were brought from the quarries of Aswan. Now while you are on a trip to the Unfinished Obelisk you can see innumerable inscriptions in the area around the quarries. These are probably the descriptions of the various quarrying projects that were undertaken in the past days). Dinner & Overnight in Aswan.

Then at afternoon transfer  to Aswan train station for your overnight Sleeper train to Cairo. Dinner on the train.

Optional: “Why not visit The colossal Temple of Abu Simbel built by Ramses II (XIXth Dynasty) and lately saved from inundation of the Nile waters in among the glories of ancient Egyptian monuments. The temples were built out of a sandstone rock cliff, and representation of the deities to which each was dedicated is carved on its huge façade. Nearby, also saved, lies the small Temple of the King’s wife Nefertari, dedicated to the goddess Hathor”.

Breakfast on the train,

Then Escorted transfer from Cairo railway station to Cairo airport and assistance with check in formalities for the flight End of services.

All rates based per person per double room based on bed and breakfast , EXCEPT

Nile Cruise based on 5 stars, full board accommodations

For per person in Triple room 10 % Reduction 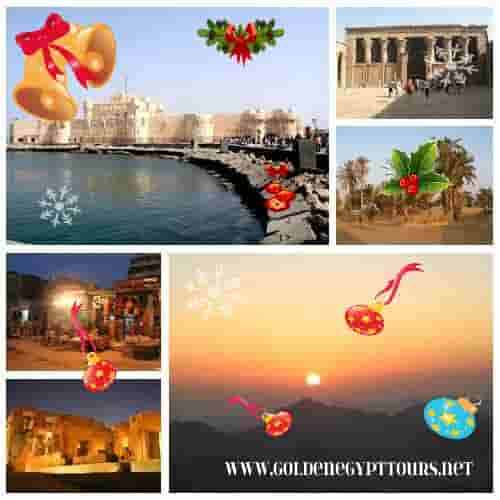 Easter Vacation in Egypt As Easter and spring vacation are really unique and not-repeated opportunity to discover new parts of world and enjoying pleasing times, Golden Egypt Tours offers you a great and wonderful offer...